**I’ve been toying with a few loathable characters for a book that has been ruminating in my mind for a long time. Here are a few of those characters. What follows is merely a treatment, not the actual work. I’m just trying to wrap my head around these people, so feedback is more than welcomed. Thanks!

“This brioche is to die for, Harry. You just have to send the recipe over to our chef.” She adjusted a pearl earring the size of a robin’s egg and swirled a bubbling brew of Veuve Clicquot around in her flute.

“Really, Marjorie, that’s under Juliet’s jurisdiction. I know she brought Elgin’s in for the catering. Beyond that I’d have to check my bank statement.” Harry landed a mock uppercut on Austin Sheckley’s squatty gut—Marjorie’s husband—and the two gentlemen broke into hearty but measured laughter. Not real laughter, which would involve some tiny shred of humanity. No, not that. This was more of a loud, robotic chuckle, obnoxious by design, like the variety you’d hear at a board meeting or a power lunch. The truth was, Harry Schilling and Austin Sheckley didn’t care for each other in the least. They were more business rivals than anything, a description that fit most of the guests invited to the Schilling’s for their annual cocktail party.

“I haven’t seen your darling wife all evening,” Marjorie said after a swallow of champagne.

“She’s around here somewhere.” But Harry knew exactly where she was. She was locked in the master bedroom, where she’d find herself at many of the functions hosted at the Schilling home. And always for similar reasons—she looked fat in her dress or the caviar was too salty or the band didn’t play smooth jazz or any combination of household minutia that threatened to undermine the sanctity of her event. Sometimes Harry thought his wife had actually convinced herself she was the one doing all the cooking and decorating and saxophone playing instead of barking orders at the help and watching them conjure up an event out of thin air.

“Do send her in my direction if you happen to find her.”

“It will be my mission, Marjorie. Now, if you two will excuse me I’ll start the hunt.” Austin patted Harry on the shoulder and they shook hands with a firmness that was just right for business but too aggressive for friendship. Harry drained his champagne flute in one gulp and placed the empty on the silver tray of a roving waiter. Then he was off through the crowd of guests.

He avoided the dining room, where Juliet had the staff from Elgin’s lay out a seafood bounty on the long, oak table Harry shipped over from Salzburg. The thing was built almost a century ago, but the food upon it had probably been hooked and filleted earlier that day—crab cakes and grilled swordfish and lobster tails and shrimp cocktail. Harry knew there was always a crowd to be found around a shrimp cocktail, and he had no patience for crowds.

He cut through his study and emerged in the living room where a large block of ice was carved in the shape of a mermaid. Droplets of ice-melt drizzled down her chest and collected in her woven, seaweed bikini top. Her tail was flipped up like an elephant’s trunk as she basked on a frozen rock that was backlit so the whole sculpture sparkled in a cascading, golden glow. Hedgerows of shucked oysters lined the bed of crushed ice below the mermaid and a few of Harry’s guests tapped drops of hot sauce on top and slurped their oysters down raw. It was the exact spot Juliet had picked out for him to make the announcement.

“Hell of a party, Harry,” one of the guests said.

“Glad you could make it.” Harry didn’t offer his hand, mostly because Mel Langston was a scummy son-of-a-bitch. He was a lawyer, like Harry, but a lawyer of the worst kind. Personal injury. He chased ambulances by day and cashed in on people’s miseries by night. Put a Porsche in his driveway and a yacht in his boat slip, but that didn’t make him any less scummy in Harry’s eyes.

Harry scooped another flute of champagne off a passing tray. “I like the suit, Langston,” he said. “That Armani?”

Langston straightened his solid, black tie and smoothed the lapels of his matching jacket. “Nah. Had this one made. Custom job. I don’t shop with the peasants anymore. Not since the McHumphrey case.”

“Oh yeah. Old lady got trapped under a SEPTA bus. Cracked three vertebrae and busted her hip. Never even went to trial.” 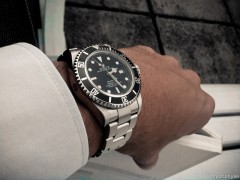 Langston brushed some imaginary lint off his sleeves and stretched his arms out in front of him so his Rolex would peek out of one of the cuffs. “What do you think?” he asked, and the two joined forces in more of that boardroom laughter that’s enough to make any working stiff want to puke.

Harry exchanged a few more pleasantries with Langston, said his farewells, and then slipped up the back stairway to the master bedroom. He shook the doorknob. It was locked, but he carried a key for just this purpose.

“Jules, I’m coming in.” There was no response from behind the door, so Harry slid the key in the hole and let himself inside. Juliet was face down on the bed. She was still in her black dress and a single high heel dangled off one of her feet. The mate lay abandoned on the floor beside the bathroom door. There was a streak of mascara on her pillow and an empty box of tissues on the nightstand. “You know, we’re hosting a party down there,” he said. She didn’t respond, so he moved closer to the bed and ran a finger across the small of her back.

Juliet let out a few sniffles. “It’s all ruined,” she said.

“Everyone’s having a good time. Come down and see.”

She pulled a crumpled tissue out from under the pillow and blew her nose like a trumpet. “The contractor called,” she said, and her voice was strained and crackling. “There’s a problem. They won’t back down and now it won’t be ready when I need it.” A fat teardrop collected at the corner of her eye and rolled down her cheek like a make-up stained torpedo.

“Is that all? That’s why you’re locked in here like Rapunzel?”

“How could anyone possibly know about the announcement?”

Her eyes dropped to the bed sheets and suddenly she had total control of her emotions, like she’d just been hit in the face with a bucket of ice water. “I may have mentioned something at the club the other day.”

“What do you mean ‘it doesn’t matter?’ I worked damn hard to climb the pecking order at that friggin’ club. I’m not about—“

“No, no,” Harry said, and he was laughing for real now. There was something about hearing Juliet curse that made his ridiculous marriage to her seem worth it. “There will be an announcement tonight, Jules. I’m Harry fucking Schilling. You think a preservation society will stop me? I don’t give a shit how many names are on that petition. It’s paper. Nothing more.” Harry twisted his forefinger around Juliet’s thumb and felt her take hold. His eyes were soft, sincere upon hers. “Baby, I’ll burn that place down and rebuild there myself if I have to.”

Juliet rose from the bed and threw her arms around her husband, satisfied to know her new beach house would be ready to impress—she’d be able to host the most obnoxiously gaudy Independence Day soiree Janet Weisman had ever seen. Harry had promised it. And, to Juliet, that meant something.