It’s high times in Philadelphia this morning as fans across the Delaware Valley load up the chuckwagons with beer and other tailgate essentials and head to the Linc for Eagles Kickoff. Except this home opener is unlike most in Eagles history because for the first time ever, the birds will have a rookie draft pick starting under center.

Yes, today the Carson Wentz era officially begins. And to all of us worried about how long it would take to arrive, the resounding answer proved to be: not very long. And, oh, did I mention this guy got all our draft picks back in the process? But that’s another story altogether.

So, I’m pretty damn excited for this game today and I know all of you feel the same way. We all want to see Wentzamania run wild on the hapless Browns, and there’s a good chance it will give the 2015 Browns pass defense ranked 22nd in yards allowed through the air and 29th in pass TDs allowed. (per Pro Football Reference) 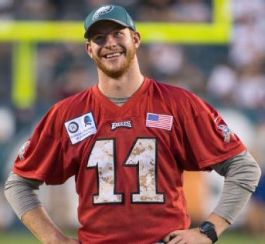 But I urge you to keep those famous Philly fan expectations in check, because the kid is just a rookie coming off a rib injury and a missed preseason…and the NFL? Well, it’s fucking for real. No one is going to feel sorry for the innocent, little ginger from North Dakota once the bullets start to fly. To give you an idea of what we can expect from Wentz over the course of the season, here are the slash lines of the last three legitimate franchise-caliber quarterbacks to go under center for the Birds in the rookie campaigns:

(all stats per Pro Football Reference)

Stretched out over an entire season, not pretty. That said, I wouldn’t sleep on the Wentz kid. By all accounts he’s a quick study, and if Jim Schwartz can keep the defense rolling like it was in preseason, “Can’t Miss” Wentz may not have to handle the ful

l brunt of the load…a la Mark Sanchez in his rookie campaign with the Jets, who happened to lose in the AFC Championship that year (2009).

Still, I urge you, when things go south for the kid this year (and at times they will) we have to stay off the bridges, people. We have an opportunity to create a QB/fan base relationship free of hostility for once. In Philadelphia! So, let’s not fuck that up.

If we can keep our emotions in check and let the season play out, I think we’ll witness the emergence of a kid that appears to have a very special level of talent. And then we can watch him bring Lombardi trophies home to Wentzylvania for years to come.

Yours in the Bond,

2 thoughts on “An Open Letter to Philadelphia Eagles Fans: Welcome to the Wentz Era”