Ever since I picked up my Harry Kalas statue at the August 20 giveaway night I’ve been pretty depressed. I mean, it’s bad enough watching a listless team go through the motions for the last month of the baseball season. No pennant race, no playoffs, no hope…until next year.

That infamous Philly mantra has always been a bitter pill to me, but the pill slid down much easier with a Harry Kalas chaser. Somehow, no matter how bad the Phils were playing, I could always enjoy the game with “the K” at the helm. I’ve been truly missing him lately and I know you feel the same way.

So, I decided to post this letter I wrote to Harry shortly after his death. He never read it. Nobody did. I just thought it was still relevant to a fan base slogging its way through the dogs days of summer. Here’s to Harry Kalas…greatest sports broadcaster in the history of the world and elsewhere.

I never thought the day would come when I’d have to say goodbye to one of the closest friends I’ve ever had, yet never met. But alas, no one is invincible. Not even you, my friend.

You may not know this, but our friendship began when I was three years old. You entered my living room one summer evening around 7:35 with the simple flick of an old transistor radio. My father had spent much of the afternoon fixing the old radio on his work bench in the garage and recounting to me the heroics of the 1980 Phillies. He bragged about how he’d pushed me up and down Broad Street in a stroller to celebrate the team’s first World Series victory in 20 years. He talked about Charlie Hustle’s game saving catch and about how he’d somehow found his way into the locker room for the team’s celebration.

But mostly he talked about you, Harry. He told me that you were the Philadelphia Phillies. He told me that the soothing and drawling tones of your melodic voice would haunt me forever. He told me that listening to Harry Kalas and Richie Ashburn call a baseball game, two of the closest and most legendary friends the game has ever known, was part privilege and part Philadelphia birth rite. He told me so much more on that afternoon as he tinkered with the old radio, but the years have since erased much of it from my mind.

But once the radio was brought back to its former glory later that evening and the familiar sounds of baseball were once again pouring through its dusty speakers, my three year old ears were given a gift they will still remember when they turn 103.

It was you, Harry. It was a Michael Jack Schmidt shot that was “WAAAAAY OUTTA HERE!” It was a Steve Carlton fastball that “struck him right out, outta there!” It was the perfect mix of playful banter and Whitey witticisms between pitches. It was the idle moments, filled only with the loud hush of crowd noise and my longing for the next honey-coated phrase to float effortlessly through your microphone and out through the dusty speakers.

And that’s all it took. I was hooked for life.

A few years later, when my father’s pair of season tickets behind the plate at the Vet finally became his and mine instead of his and my mother’s, an odd little tradition took root in my household. On game nights my father and I, normally both voracious eaters, would suddenly slow down our pace at the dinner table and offer each other a solemn and conspiratorial little wink which had meaning to us and us alone.

And my mother, each time, would shake her head and faithfully remind us that our slow pace would cause us to miss the beginning of the game.

Of course, this was no mystery to us. It was our plan all along. 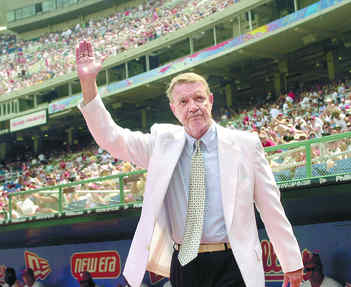 In this Sunday, Aug. 18, 2002 file photo, Philadelphia Phillies announcer Harry Kalas waves to the crowd during ceremonies honoring the Hall of Fame broadcaster before the start of the Phillies game against the St. Louis Cardinals, in Philadelphia. Kalas, who punctuated innumerable home runs with his “Outta Here!” call, died Monday, April 13, 2009, after being found in the broadcast booth before a game against the Washington Nationals. He was 73. (AP Photo/Dan Loh)

You see, the first two innings of any Phillies home game we dedicated to you, Harry, as we made our journey up Route 42 and across the Walt Whitman Bridge to catch the rest of the game in person. We just needed you to introduce it to us on the radio, to put us in the right frame of mind for a game.

And, usually, our tradition would continue after the game as well. We’d swing on over to Oregon Avenue to enjoy a Pop’s Water Ice and to sit triple parked in my dad’s car listening to you recount, in your own patented way, the game we had just watched with our own eyes. Only this time, it would sound a whole heck of a lot more like Phillies baseball.

Now, as I near the conclusion to this letter, I realize it’s quite impossible to bid you a final farewell, my friend. Your voice told me the story of baseball when I was barely old enough to walk, and the sport has been swimming around in my veins ever since. When I let you into my living room on that fateful summer day more than a quarter-century ago, I invited you to stay forever. And though other announcers will grace the Phillies broadcast booth from here on out, it’ll always be your voice I’ll hear when I see Phightins take the field.

With Undying Gratitude and Respect,